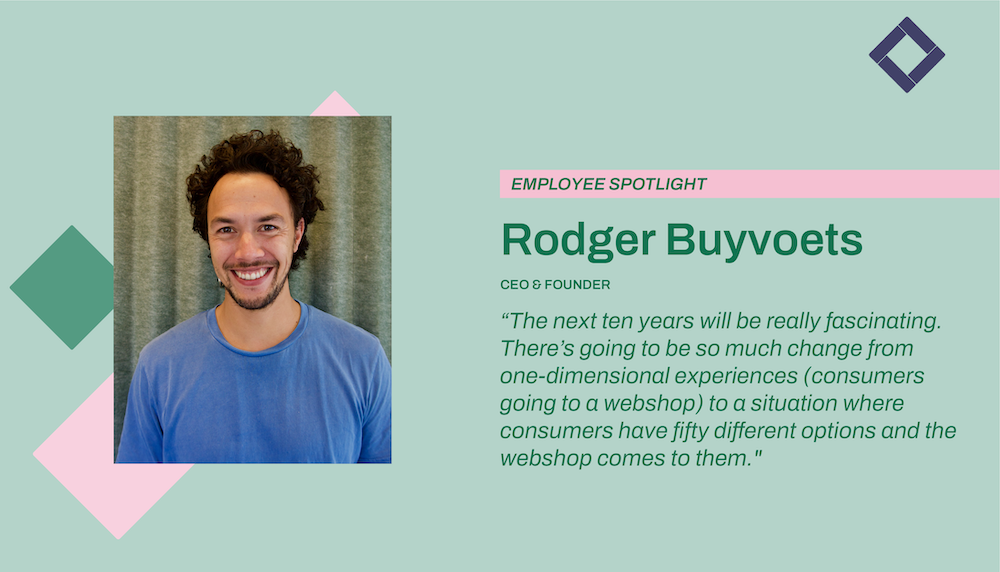 Left to right: Rodger, Sjoerd, and Leonard, the founders of Crobox

In 2013 I was running an agency that was going quite well. But my partner and I always had the ambition to move into tech products. We met Leonard through an acquaintance in 2014. Leo had a single line of code, but no commercial team or website. The product was optimization as a service product for retailers.

Which sounded interesting, so we started working together in June to see how it would go. It was already by August that we decided to formalize and start the company. Our first fashion retail customer was America Today. I created a presentation for them (on PowerPoint) and without a website, we got our first pilot! And after forty-five days we saw a conversion uplift of 20%.

So we thought – holy crap! – we’ve struck gold! Which we leveraged as a use case to grow our customer base. At the time we were really only four people: Sjoerd and Leonard were doing the tech work, and Wouter and I were responsible for the commercial side of things.

And that’s basically how it all began.

Why did you decide to become an entrepreneur? I didn’t really decide to become an entrepreneur. As far back as I can remember I’ve always liked creating and starting things.

For example, I had a friend from school called Raoul and together we created a game. I guess that resulted in entrepreneurship. My own kid is doing the same kind of self-starting stuff with his lemonade stand.

My second entrepreneurial invention was when I was sixteen during the genesis of the internet. Everyone wanted their own website at that point so I got involved in selling websites.

My parents are also entrepreneurs, so I guess my whole life I’ve always been involved with the founding and starting of new businesses. So a) it runs in the family, but b) I also want to feel free in what I do.

Crobox was featured in Fashion United for winning 1st place in the LVMH Innovation Award.

When you run your own company, you can decide your own trajectory and the trajectory of your career. And I like to take risks as well. Actually, I started Crobox at exactly the same time as my son was born. I was embarking on the adventure of fatherhood, while also giving birth to a company.

What’s one piece of advice you wish you had when starting the company? Believe in yourself. A lot of people have ideas, and it’s very easy to have a great idea for a company.

You can always go back and find a job with more security if it doesn’t work out. But you’ll never know if you don’t try. I’ve noticed that a lot of people with great ideas get protective or secretive about them. But another piece of advice I’d give for free is that if you do have an idea, it’s important you gather all kinds of critical feedback about it.

In your opinion, what’s the best part of working in Crobox? The quarterlies of course! Above is the winning team of the Amsterdam Escape Rooms during a Crobox quarterly.

The best part of working in Crobox is the diversity in backgrounds. You get to learn from other people with different cultures, completely different experiences, but also backgrounds ranging from psychology to AI. Another Crobox night out in Amsterdam.

We also each have a set of different opinions which makes all of our interactions very rich. At the moment, I’m really proud of this team. We’ve had our fair share of challenges, but we’ve persevered as a team. It’s something that we get complimented on often – despite being all very different, we have this family feeling and get along really well. At Crobox, we have a great work/play balance (which isn't to say that at work we just play...).

Where do you see retail / eCommerce in the next ten years? Talk: The New Era of Fintech Powered by Blockchain

I think that there will be a complete shift in consumerism: Instead of people going to webshops, webshops will come to the consumer.

Meaning, the data will be flipped. There are a lot of themes that already support this, for example, the rise of privacy restrictions and the invention of the blockchain and AI.

Consumers are starting to catch on too. For example, adverts pay a lot for my attention but I don’t get anything back. This is a broken relationship that is going to change. Ads on Brave Browser, for instance, are paying the user for the ads that they see (paid in tokens).

This cuts out the infamous middlemen (like Google and Facebook) who earn a huge amount of money of which the consumer sees nothing. I think eCommerce will transition into this model eventually, and therefore retail too. We’ll also continue to see eCommerce blended over multiple touchpoints. Like Instagram’s shoppable ads, there will be many different touchpoints where there is a direct transaction.

I think the next ten years will be really fascinating. There’s going to be so much change that it really could go from one-dimensional experiences (consumers go to a webshop and that’s it) to a situation where consumers have fifty different options.

What’s the weirdest thing that’s ever happened to you? When I was eighteen I went on holiday to Brazil with two friends. On the last day, we were in a shopping mall…but shopping malls in Brazil are either for men or women.

So we walked into this huge six-floor mall where the ratio was definitely more women. At the tenth floor, we were having lunch when suddenly people started taking photos of us. And then a sixteen or seventeen-year-old girl came up to us and asked we were The Calling and if she could have our signature.

So we gave it – for fun – but then a huge group started to surround us. And there were girls of all ages, asking us to sign their bellies and really crowding over us!

It actually got kind of frightening. No one was holding the crowd back so we got so much pressure from all the people. Quickly we decided to run outside to get a taxi, but we were being chased down those six floors!

I mean, it was a unique experience to feel famous. We found out later that The Calling (the real band!) were actually performing nearby.

What’s your favorite up-and-coming technology and why? There is this blockchain technology concept called KLIMA, launched really recently. Basically (and without being too technical), its a carbon currency that’s crypto backed by carbon offsets.

It will force companies who need to obtain these offsets off the market to think in a more environmentally friendly way (because it limits how many ‘credits’ are available so increases their price).

I’m super excited about this. Right now it has a lot of traction in the US, but it’s a great way technology can think about the environment (making it not financially viable to buy carbon credits), forcing them to become more sustainable.

What’s a fun fact about you even your colleagues wouldn’t know? Some colleagues don’t know this…but I’ve decided to quit alcohol for six months since November 1st, 2021. It’s an experiment mostly because alcohol is so ingrained in our social life and activities we do, I’d like to experience what it means to live without it completely.

I would swap with Sjoerd for a day because his work is 180-degrees the opposite of my work. I’d be curious to see and experience what that looks like. Of course, with the same level of skills and line of thinking.