Dresses up as a bat? Keeps developers in balance? You're thinking of our Head of Customer Operations – learn about Elaine here! 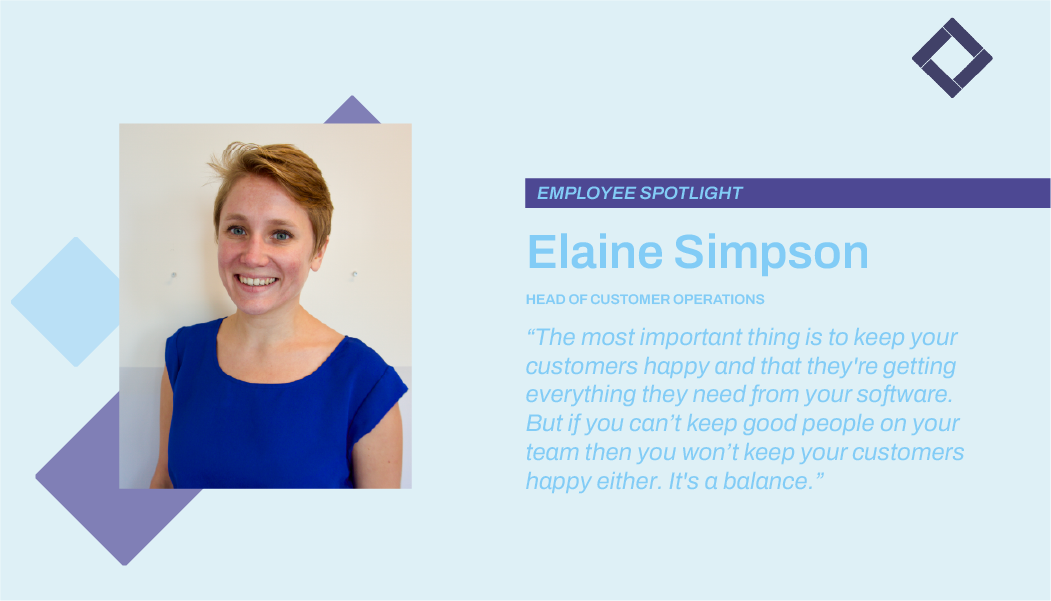 Dresses up as a bat? Keeps developers in balance? You're thinking of our Head of Customer Operations – learn about Elaine here!

If you could sum up your job in one word, what would you say?

In one word? When we were on our company ski trip our caterer was apparently calling me ‘boss lady’ behind my back, so maybe that 🙃?

My job is a lot of deciding what’s important for our team to be working on and prioritizing projects. It’s a lot about making sure we are keeping our customers happy without making our team unhappy with the amount of work we’re committing to. So you have to balance and know when to say “yes” and when to say “we just can’t take that on right now”.

In short, it’s about keeping customers and my team happy at the same time.

So the word I’d choose is: Balance. In the short time you’ve been with Crobox, what would you consider your biggest accomplishment so far?

It’s not so much a personal accomplishment, but I think the team took what could've been a lot of custom development work (which cost us a lot of development hours) and instead made parts of the product able to do what used to be custom work.

And I feel that I’ve been a big part of making that happen by making sure we’re using our time in the right way.

Again, it’s about doing what our customers request while still scaling and making requests realistic and part of our product offering. For one of Crobox’s quarterlies, we spent the afternoon on a boat riding the canals of Amsterdam.

Who would your ideal customer be? All my sneakers are from ASICS, but they’re already a customer so this may sound like I’m sucking up…But speaking of which, I’ve worn their Cumulus shoes since I was sixteen since I used to run cross country. I think I still have a pair of Cumulus 7s in my closet which are really, really old. They’re my painting and cleaning around the house shoes.

Now even though I’m not a runner anymore (too many injuries) I have a bunch of newer versions, both running shoes, and sneakers. So I would probably say…ASICS. Crobox quarterly at an escape room.

What would you recommend to someone following the path of a project manager?

The most important thing is to keep your customers happy and that they're getting everything they need from your software. But the part that gets overlooked is keeping your team happy.

If you can’t keep good people on your team - for example, if they’re not enthusiastic about working for you because you’re overpromising results - then you won’t keep your customers happy either. It has to be both.

And you have to really understand the product you’re working with and be able to get your hands dirty. If you don’t know how the product works, then you’re not going to be able to consult the customer to do what’s both easiest on the team and best for the customer, so you’re likely to get yourself into some sticky situations.

You don’t have to know everything, because that’s impossible. It’s also what your team is for, but, in my opinion, you can’t be a good leader of a technical team unless you have a general understanding of the technical side of things as well.

What’s your favorite thing about working in Crobox?

Well, most of my career was in the US, so as a comparison the work/life balance in the Netherlands, but specifically at Crobox, is a huge improvement for me.

Being able to really work while you’re at work, but then enjoy your time off while not thinking about work while you’re off…For me, this has been amazing. I think it’s made me better at my job too because I feel refreshed and recharged after a holiday rather than overwhelmed and stressed.

What do you do in your spare time? Hang out with my dog, the love of my life, Seamus. And also my partner, the ‘second’ love of my life. We go to parks or to the beach where Seamus can run around. I also like to knit and make my own clothing. I do ceramics every week after work.

Last year I read sixty-eight books so I really love to read. But maybe don't put that in there because it sounds like all I do is read! I also play board games with my friends I promise!

I love to travel - especially around Europe. That's one of the highlights of living here, you can be close to so many cultures. Elaine and her partner in life in Munich (and that's her husband, Milan on the left).

What’s a fun fact about you even your colleagues wouldn’t know?

I’m an open book! Does everyone know I like bats? I think they do…I tell everybody that because they’re my favorite animal. Halloween is a big deal in the US - Elaine dressed up as a bat for work at her previous company.

I've been to 47 out of 50 US states. Oh, and I used to run track and cross country and I was actually pretty good at it. My best time was 1600m in 5mins19. Also, I love to sing and dance, though mostly just around my house or with my dog. Elaine 10 years ago meeting the band Twenty One Pilots.

I know a lot of song lyrics. Mr. Brightside is going to be the first one…is that too basic? Does everyone know the lyrics to that?

Also every Kesha and My Chemical Romance song EVER…wait don’t put that in either. Most AJR songs, every Twenty One Pilots song…

Lots of old country songs from when I was a kid, the Dixie Chicks (I think they’re now called The Chicks). I know the lyrics to most pop songs from the 2000s to 2010 but pretty much all emo music from the early 2000s.

I would also add that I reallyyyyy like to sing…which I think I mentioned earlier. I like to listen to songs that I can sing along to, even though I’m not that good at it.

If you could swap lives with someone in the office for a day, who would it be and why? I’d swap lives with you (Nikki) because I’d want to hang out with your awesome friends! But jokes aside, we have very different jobs and I’d want to see what a day in your life looks like.

I answer emails and am in meetings most of the day, and I would love to have a day to be creative at work. (Have I ever told you that when I was a kid I wanted to be a writer when I grew up? Maybe that’s something I should have said is a fun fact about me.

I was writing a “novel” when I was 11… it was really bad. And later I found out I was good at math and science so I studied engineering and abandoned my dreams of being a writer).

So I’d love a day being you because I’d get to relive my childhood dream and then remember again that I’m bad at it 😀😂.

Amazon is known for their customer-centricity - whether we agree or not. Now you can too!

Retail is evolving to focus on a product-driven customer experience. Read it here first.

How ASICS is creating product-driven customer experiences with Crobox

An extended view of how we helped ASICS gain unique product and customer intelligence.